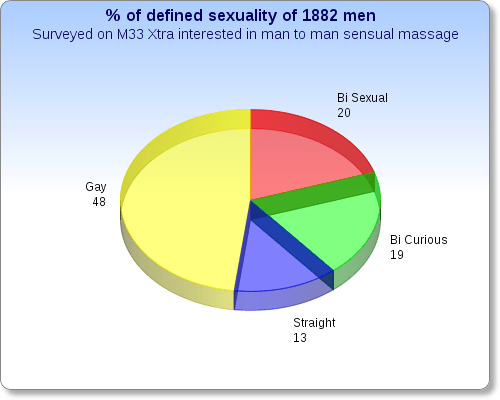 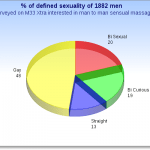 To put the survey in context it should be understtod that the men taking this survey have done so because they were interested to find out more about male to male sensual massage. It should also be appreciated that these men have probably be searching the web so find a male to male sensual massage service web site by using particular search phrases or links from other similar web sites. This implies that they are genuinely interested in experiencing some form of male to male physical intimacy.

It must be noted that this survey does not give an unbiased picture of male sexuality in general since it should be assumed that most heterosexual men are unlikely to be looking for male to male sensual massage. However the results so far clearly show that it is wrong to assume that ONLY gay or bisexual men are interested in this type of male to male experience and that many, self identified, heterosexual and bi curious (men who have considered homosexuals contact but may have never taken part) men are interested in experiencing male to male intimacy by taking a sensual massage with a male masseur.

To read more about my own personal theories on what influences male sexuality  and why so many non gay men do seek male to male intimacy go to my web site Sexonality Test.