The Truth About Aphrodisiac Food

You are here: Home1 / News2 / Latest News3 / The Truth About Aphrodisiac Food

This article article taken from Healthline

An aphrodisiac is a food or drug that arouses sexual instinct, brings on desire, or increases sexual pleasure or performance. A myriad of pharmaceutical drugs are available and marketed specifically for their libido-boosting effects. However, some individuals prefer natural alternatives, as they’re generally safer and tend to have fewer side effects.

It’s worth noting that many aphrodisiacs do not have the backing of scientific evidence, and some natural products may have negative effects. If you’re thinking of trying a supplement, talk to your doctor first. 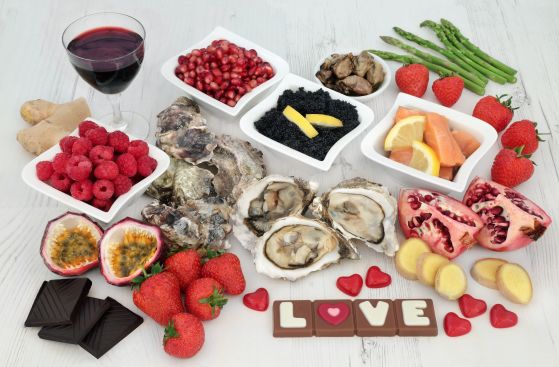 Maca is a sweet root vegetable with several health benefits.

In South America, people commonly use it to boost fertility, and its nickname is “the Peruvian Viagra.” It grows mainly in the mountains of central Peru and is related to cruciferous vegetables, including broccoli, cauliflower, kale, and cabbage

Animal studies found increases in libido and erectile function in rodents after consuming maca. Four other studies suggest it may boost libido in humans, too.

One small study has indicated that maca may help reduce the loss of libido that commonly occurs as a side effect of certain antidepressant drugs.

Participants generally tolerated these intakes well and experienced few side effects. However, more studies are needed to determine safe dosages and long-term effects.

Tribulus terrestris, also known as bindii, is an annual plant that grows in dry climates.

Producers of supplements often claim that it can boost libido.

Limited evidence suggests it may help boost sexual function and desire in males and females.

Ginkgo biloba is an herbal supplement derived from one of the oldest species of trees — the Ginkgo biloba tree.

Traditional Chinese medicine uses it to treat many ailments, including depression and poor sexual function.

In 1998, for example, a small study reported that ginkgo biloba reduced the loss of libido that antidepressant use caused in around 84% of participants.

Both male and female participants said they experienced increased desire, excitement and ability to orgasm after consuming 60–240 mg of the supplement daily, although effects seemed stronger in female participants. However, this was a low-quality study, and its findings may not be reliable

A more rigorous follow-up study was published in 2004. This study found no improvements in a similar group of participants who took ginkgo biloba

Ginkgo biloba is generally well tolerated, but it may act as a blood thinner. Thus, if you’re taking blood-thinning medications, make sure to check with your healthcare provider before taking ginkgo biloba

Enjoy a Christmas oyster opening session with the Oyseter Meister

The boxes are designed for 2 people to share. We will also provide a free Zoom Oyster opening lesson should you wish. Perhaps you want to send a box to friends or family and we will conduct an online Oyster opening contest; a “shuck-off”.
We will give you a master class on the Caviar and Smoked Salmon too.
£65.00 includes delivery, polymer ice pack and thermo envelope.
ORDER NOW
1 x box of a dozen fresh Irish Oysters with an Oyster knife
1 x 10gms tin of Acipensar Baerii Caviar
1 x 10gms tin Oscietra Caviar with 2 cocktail spoons
1 x 114gms of Wester Ross traditionally farmed ‘cold’ Smoked Salmon
1 x hot smoked salmon portion from Pinneys of Orford
2 mini-bottles of red and green Tabasco
A FREE zoom oyster opening lesson for you, family & friends!
Offer includes delivery, polymer ice pack and thermo envelope
Orders to be placed by midnight Tuesdays for delivery on Friday so ideal for weekends.
Oysters are imported direct from Ireland so are fresh for additional 5 days. Caviar and Smoked Salmon for 2 months plus.
December delivery dates are Fri 18th, Weds 23rd and Weds 30th ideal for New Years eve! Just e-mail info@oystermeister.com when ordering.

Several other foods are touted to have aphrodisiac properties, but there’s very little scientific evidence to support these claims.

Here are some popular examples:

Chocolate: Compounds in cacao are often touted to have an aphrodisiac effect, particularly in women. However, studies provide little evidence to support this belief

Oysters: While one study reports that they may have some libido-boosting effects in rats, no studies exist to support the libido-enhancing properties of oysters in humans

Chasteberry: Studies suggest that this fruit may influence hormone levels and reduce premenstrual syndrome (PMS) symptoms in women. However, there’s no evidence that it offers any libido-boosting benefits

Honey: It has allegedly been used for centuries to bring romance into marriages. One variety called “mad honey” is even marketed as a sexual stimulant. Yet, no studies support this, and it may contain dangerous toxins

Hot chilies: According to popular belief, capsaicin, the compound that gives hot chilies their spiciness, stimulates nerve endings on the tongue, causing the release of sex-drive-boosting chemicals. However, no studies support this belief.

Alcohol: Alcohol may act as an aphrodisiac by helping both men and women relax and get in the mood. However, a high alcohol intake can reduce arousal and sexual function, so moderation is key

To read about 4 more Aphrodisiac foods go to Healthline