Critique of Massage My Man Workshop

You are here: Home1 / News2 / Latest News3 / Critique of Massage My Man Workshop

Critique of Massage My Man Workshop

Having always been a tactile person, I wanted to become more adept at traditional massage- strokes, combined with a slow buildup and gradual transition to a more erotic style of touch within the course of a full body massage. I am in a long-term marriage, and the sex has gone a bit stale. Upon deeper reflection, the quality of touch in my marriage needed to evolve more. I was, however, loathe to attend any mainstream massage-lessons, where it might have caused some embarrassment among other course participants, had I enquired more specifically about sensual touch. Moreover, going to some parlour, with male/ female sex-workers offering me a massage with a ‘happy ending’, was not going to further my own ‘hands-on’ learning. I researched the options online and this is how I discovered Colin. I figured that I wanted  to experience his unique style of massage and be a recipient myself, in order to be better able to put myself into the shoes of a recipient of sensual massage. That said, the aforementioned is not necessary for anyone simply wishing to attend Colin’s Massage-My-Man session.

Not being sure what to expect the first time I went to Colin’s place, I was pleasantly surprised by the welcoming atmosphere of his premises  a fresh, spacious and airy flat. He greeted me in shorts and a T-shirt, and he immediately conveyed a demeanour of intelligence, calmness, trust and respect. We had a chat in his living-room, after which he showed me his massage-room. His massage-room is a well-appointed, warm side-room with a neat en-suite bathroom, generously equipped with large, fluffy towels, a variety of beauty products, and even a hairdryer.  He left the room, while I got changed and lay face down on the massage table, covered by a towel to start with.In addition, Colin plays chilled music and uses dimmer-lighting, to set a relaxing atmosphere. I would warmly recommend women to treat themselves to this unique experience.

When I subsequently went along for the Massage-my-Man-Group Class, the atmosphere was even cosier. Candles are aglow, and different beverages and snacks are being generously offered. Both the male volunteers and the lady participants of different body-shapes and sizes were seated in comfort on the pale sofas, chatting with surprising ease, despite not having met one another before. The male volunteers were both married and unmarried. Four massage tables had been set up on the other side of the room, lined up parallel to one another and covered with giant turquoise towels. We were invited to briefly outline what we each wanted to get out of the evening.

After the initial talk (about the stages of arousal) held by Colin, the four gentlemen were asked to undress in their assigned changing-room and to return with towels around their waists. Some were more muscular, others quite lean. Meanwhile, the ladies changed into more comfy clothes in their own assigned changing room. For example, one lady wore a bra and knickers, with a camisole on top. This lady and her husband had been seeing Colin separately, to further their learning, and to spice up their long-term  marriage. Another, quite curvaceous lady with large breasts underneath was wrapped in a beach towel with a front-closing clip. She was divorced, though she was still having sex with her ex- husband from time to time. I told myself that if she wasn’t going to feel self-conscious about herself, then why should I care about my stretch marks or my soft stomach. Thereafter, it did not occur to me again how I might look to the others in the room. Another lady preferred to remain fully clothed, whereas I had changed into loose yoga-pants, with a Kimono-style wrap-over shirt, and a nice set of bra and knickers underneath. I later removed the yoga-pants and top, not only because it was a lovely temperature in the room, but moreover, because my top was  getting covered in oil, given that the massage started to incorporate more upper-body contact. Taking off my loose top turned out to be a relief for me, because the skin-on-skin contact facilitated a better sense of connection and flow between the recipient and myself.  Frankly, I would have been perfectly at ease to be completely naked later on, so that my recipient could enjoy more skin-contact, however, I decided to align myself with the overall tenor of that particular evening-course. 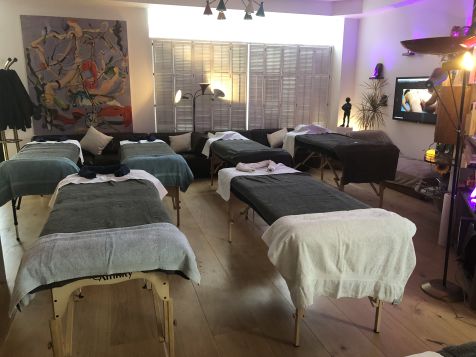 There were some brilliant massage moves, which included massaging with the entire forearm, or leaning in with both elbows, which was both pleasurable for the recipient, as well as to myself.  At one point, we were also shown how to sit at the edge of the massage table, having gently lifted one of the recipient’s knees onto our thigh, resting his bent lower leg and foot against our shoulder, while stroking his inner thighs, as he was still lying on his front. At various points, Colin discreetly beckoned the ladies  to switch massage tables, and this quickly afforded one a sense of how to adapt to one’s recipient. He also stepped up so some tables and added his own massage to the gentleman on the table, so that it could become a four-hands-massage at certain intervals. Being able to work in tandem with another professional masseur, especially for anyone who is a visual learner, as I happen to be, was a treat.

My recipients and I got into flow very quickly. The particular gentleman whom I had been paired up with at the end said he felt very safe in my hands. He later climaxed in my hands in a way which was not mechanical, but during the moment of which there was a wonderful, warm realm of mindful connectedness between us, without any guilt, shame or embarrassment. We had reached this moment through unhurried touch and mostly non-verbal skin-contact alone.

There had been no lasciviousness or  utilitarianism to this session, and therein lies the difference between functional sex and the realm of delicious, languid eroticism, which so many of us long for. The quiet, loving moment, which he and I had shared after his powerful orgasm, as he continued to lie on his back, while letting his mind drift to a place of comfort, was a very beautiful one for me to observe, as it was underpinned by mutual kindness. Many of us in society could  attain a much better sense of ease and equilibrium, if we considered developing a more in-tune style of touch.

To summarise, it was beneficial for me to note how my improved massage-technique and quality of touch had been so pleasurable to these men, men whom I’d never met before. My new learning had yielded  me the benefit of an increased confidence, which I had been hoping to improve in myself.

It was an altogether rewarding and enriching experience, which I would warmly recommend to other women, who enjoy the power of touch. And while many of us continue to crave for a better-quality touch ourselves, it is surely a good thing to put ourselves into the mind of a giver, so that we can also become better and more patient teachers in our respective private situations.

(Written by a 55-year old wife and mother, who is  of mixed Middle Eastern and Continental origin, working as a personal and business life coach, mentor and lecturer, who is also a traveller, artist and a passionate embracer of life)